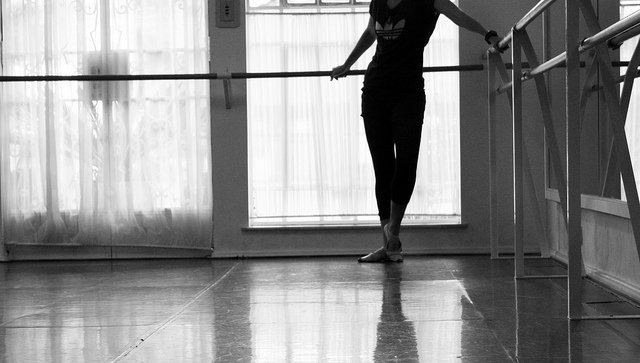 Ballet is a performing art. You are on display. This is like saying you want to be a surgeon, but you’re afraid of seeing blood. Of course, everyone feels insecure at times, but you shouldn’t allow this fear to keep you from enjoying class. Shy people tend to compare themselves to others which is a big mistake. Truth is, no one cares what you’re doing – they’re too busy focusing on themselves! As much as it goes against your instincts, volunteer to go first when your teacher offers a combination, instead of hiding at the back of the line. Doing this only reinforces negative thoughts and behaviors that keep you stunted.

2. My butt/thighs/boobs are too big.

Hey, I’m 5’5 and slender, but I got some junk in my trunk. I was born with a particular frame, and even though I’m fit, I can’t change my natural shape. When I put on a leotard, I would be instantly self-conscious about it, wishing I wasn’t so stacked in the back. As time past and I matured, I decided to embrace my beautiful backside and be the best ballerina on stage with a booty that rivals J.Lo. Prima ballerina Misty Copeland has been criticized for her voluptuous ta-tas, but she kicks butt on stage. A talented young dancer preparing for an audition once asked for my advice. She was short and stocky, obviously different than the tall, lanky girls in her division. But she was good. “I don’t look like them. Should I even bother?”, she asked me. I told her to audition anyway. The worst that could happen is they could say no. But you know what? They just might say yes, giving her an edge on the competition, leading her to inspire thousands of other young women to challenge the status quo. While her experience may not apply in your case, the point is, you’re not a prepubescent. You’re a woman with curves, may even a little more jelly in some places. Who cares? You’re swimming in a different pond. Leave the measuring tape and weigh-ins for the professionals who get paid to present a certain image.

Some locales attract a certain demographic of students. One class will have a higher concentration of seniors, where another will feature a younger crowd. “Adult” typically includes anyone 18+. You’ll find college students mixed with subscribers of AARP. Roll with it. It’s good for your social health to blend with different ages. If you think you’re too old to learn, pish posh! You’re never too old to learn something new or return to dance. It’s mentally stimulating, improves your circulation, and can, believe it or not, encourage younger ones to get off their rear end and move. I once took class with an 85 year-old lady who could do the splits! I have no excuse!

It doesn’t matter! Don’t obsess over the fact that you don’t have the perfect feet, or your turnout is less than stellar. Dance because it makes you feel good. Besides, the more time and energy you put into self-loathing, is energy that could be spent on actually improving and accomplishing your goals. What a novel idea. Also, everyone has their strengths. While you may not have the most enviable arches, you’re the most coordinated and musical (like, moi). Instead of competing with your peers, focus on your own progress. You may surprise yourself.

If you’ve been on a years-long hiatus from dancing, it can be discouraging, even humiliating to return to a class of able-bodied, even markedly talented dancers. But did you think you were going to get a jail-free card from aging? This Princess Syndrome is unrealistic. Get over yourself and accept that you will be starting from square one – and that’s ok. For a time, I was struggling to recapture my heyday to no avail. I was too busy focusing on my students and personal life to expect to perform at my peak. It eventually took an adult student of mine, a stunning, intelligent older woman to release me from this self-imposed notion. “You’re in a different season of your life,” she told me. Her encouragement to accept who I was now, rather than what I was then, gave me the attitude adjustment I needed. Be modest instead of trying to relive your glory days. Chances are, you’ll find yourself in a happier place than you expected.

Have questions or concerns about going to class? Send me a private FB message and I’ll be happy to help.

Hi I’m Nikki, The Last Dancer. I started this shop + blog (formerly BalletforAdults.com) as a creative outlet and to continue my identity as an artist. My whole life has been influenced by dancing and this shop focuses on items that speak to a dancer’s entire lifestyle. If you found yourself here, my hope is that this website offers you inspiration too. The shop contains my own products and the blog is original content.